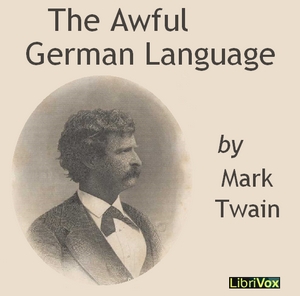 This long essay is a work of mock philology, one of several appendices to Twain’s travel novel, A Tramp Abroad. In it, Twain explains, complains about, and shows how one might improve upon various aspects of the (awful) German language. His examples of precisely how the German language is awful include the famed “separable verb” – which allows one to put the first part of a given verb at the beginning – and its second part at the end – of a given clause or sentence (which may, indeed, be very long). He also makes fun of the extreme length of certain compound nouns (which are created by tacking two – or more – words together, without using hyphens to clarify where one ends and the next begins), as well as the many noun and verb forms one must master (memorize) in order to use German cases properly.
As the essay progresses, Twain includes a few hilarious passages that are partly or mostly in (his own, awful) German. Nevertheless, the work is easily understandable even by people who don’t know any German at all.
(In the novel, A Tramp Abroad, Twain details his journey with his friend, Harris, through Germany, the Alps, and Italy, where he encounters various ridiculous situations. Here, much of the humor lies in his silly, often over-stated characterization of the circumstances as quickly grasped and easily explained by such a seasoned tourist as himself, while he also make plain throughout the profoundly strange nature of many of his experiences, and the various pitfalls he and Harris run into as they try to navigate their unfamiliar terrain.) (Introduction by Kirsten Wever)